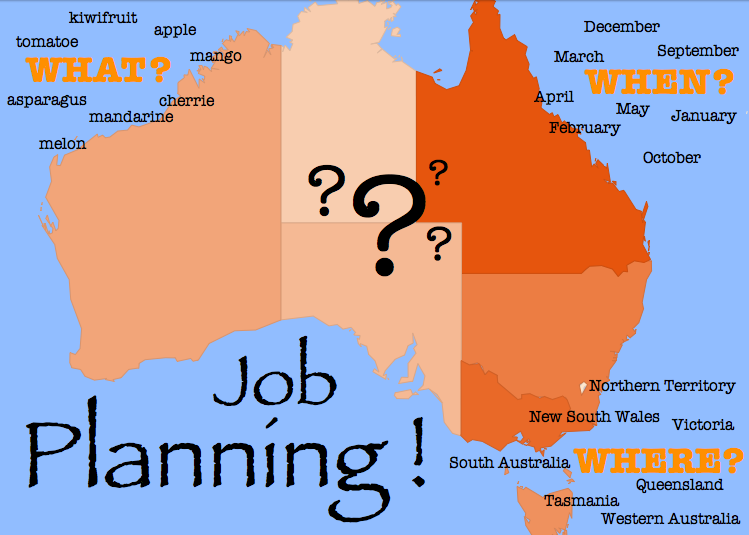 On December 24, 2015, Posted by ThePickingRocket , In Work Organisation, With No Comments
Share this:

Every country has its own reality for fruit picking jobs. As you would never leave your country without knowing at what time is your flight; you must get informed about the reality of the places you are going to, especially if you intend to work there. Believe it or not, but neither apricots grow 12 months a year, nor apples, tomatoes, grapes, avocados, etc. So depending on where you are planning to go, get informed!

Fruits and veggies have their own growing cycles and it’s important to learn them before deciding to make any move to any growing area. The window to pick a particular fruit can be pretty short: cherry picking don’t usually last more than 30 to 40 days in one farm, but in Australia if you manage to combine 3-4 farms in a row in different picking areas, then you might be able to keep picking them for about 4 months.

The three W rule: WHERE, WHAT, WHEN?

Knowing what to pick, where to pick it, and when to pick it, must be considered as a whole. In order to plan your fruit picking job, you must ask yourself those 3 questions:

Planning your job in advance is essential if you want to get a chance of enjoying a great experience in fruit picking. Every year, I see some workers looking for a job just 3 days before the end of the season. As many others, I have made this common mistake myself! But such operation will probably cost them more money than they will earn. Traveling to remote areas to pick only for 3 days, associated with the time you need to be efficient at a new job, often represents lots of spending for just a few earnings. Many bad experiences in picking are due to a lack of awareness from travelers. Enjoying your work while traveling will spice up your global experience abroad. So don’t be like them!

Lately, we have been implementing all our regional maps with a specific crop season calendar. Click on a specific province/state to have more details:

Can I entirely rely on these harvest season dates?

All the information provided regarding the harvest seasons is a compilation of data we have found on different websites and government database. Taking into consideration our strong and long experience in this industry, we made some important modifications to improve the reliability of these calendars. Nevertheless, for different reasons, it shouldn’t be taken as granted and/or completely accurate in every situation:

So keep in mind that this “timetable” of fruit/veggie is just here to give you a GLOBAL idea of the season. It will never replace a serious talk with the farmer to know with exactitude when the season is starting, when it’s finishing, and if they have gaps in-between varieties.

Now that you know everything about how to plan your fruit picking job, we wish you good luck in your quest! Keep us updated, and don’t hesitate to communicate with us in order to get more information!

Warning! In order to retain/attract workers to their farm, some farmers have the tendency to “make” the season appearing longer than it actually is, … Don’t assume that they will necessarily tell you the truth (like pickers, some farmers are more honest than others!), and try to compare information with the previous year’s season. We strongly encourage you to read other existing pickers’ comments, and/or to rate a farm yourself to help the community regarding accurate information about a picking season!