On November 27, 2015, Posted by ProPicker , In Australia, Pear Picking, Picking, With No Comments
Share this:

This post has been sent to us by “English Ben”, who has been picking fruit all around the world for the last 10 years, including pears for many seasons. We are really grateful that he took the time to share his expertise and accept to publish it on Pick The World. Also a big thank you, once again, to Fanny and Gaetan for their pictures.

If you wish to share your fruit picking experience among the community, please don’t hesitate to contact us, it will be a pleasure to publish it!

85% of Australia’s pears are grown in and around the town of Shepparton in the Goulburn Valley, Victoria. Starting towards the end of January and continuing for about six weeks means that the season falls nicely after the mainland cherry season and finishes in time for some apples. Pears are far less susceptible to the elements than the fore and after seasons; Cherries can be ruined by rain, apples by hail, and this unfortunately does happen from time to time which can be rather distressing if you are short of money. Furthermore, pears are simply a far more consistent fruit in terms of what you can expect to pick and therefore earn on a daily and even seasonal basis. For these reasons I label pears “The Reliable Fruit”. 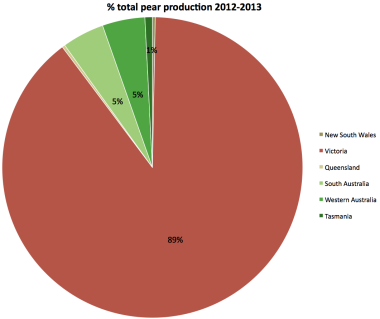 Make no mistake the work is hard; pears are a dense fruit making them heavy relative to their size, far heavier than apples for example. The trees are often grown big and the fruit tends to grow in the upper regions meaning a great deal of ladder work. Add all this to the fact that Shepparton at this time of year is normally very hot, if you want to make decent money expect to work up a healthy sweat.

Some farms pick for the cannery in Shepparton but for the purpose of this blog I’ll make the advice on picking market fruit. Market fruit is either sold immediately where the bins are sorted in a packing shed, or more likely, bins are put straight into cold storage and released to the market as required. Damaged fruit can have bad consequences once left in cold storage for any period of time and the price between first and second class fruit is considerable for the farmer: care therefore has to be taken not to drop the fruit from any height into the bag or when releasing from the bag to the bin. Try and avoid scratching the pear against the tree and breaking stems. Obviously when picking for the cannery, damage to the fruit is not such a problem. 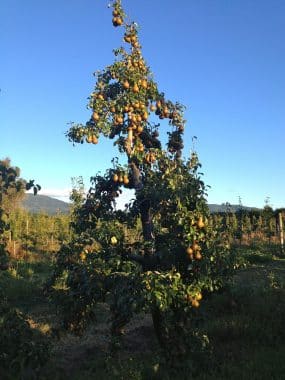 A tree loaded with pears, but it will need a lot of ladder job to pick them

Most farms grow three varieties of pear and the techniques to pick them are all quite different. The first variety to be picked is the Williams’ pear. They have a short stem and tend to grow in clumps. To pick them put your hand around the pear and simply lift upwards using your hand to protect the pear as you pull it from the tree and into your bag.

The Packham pears have longer stems and tend to grow more individually off the bud, they should be picked individually much like single stem cherry picking; using fore finger and thumb to click them off away from the bud, ensuring the stem stays intact and the bud stays on the tree. Once again care must be taken not to scratch the skin although if the tree has been pruned properly this should be easier than with the Williams’. Packhams can often be a little tough to get off to begin with, but will become easier as the season progresses. 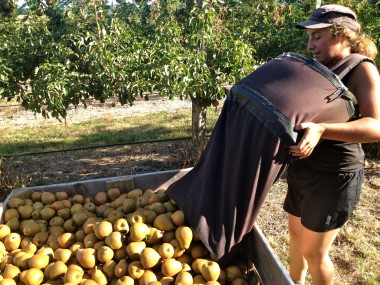 You must be gentle when unloading your bag into the bin, so you don’t damage the pears

Most farms grow a variety called Beurre Bosc, some only grow them as pollinators but most have enough to give you up to a week of work at some point in the season. Bosc’s like Williams’ tend to grow in clumps but have very long brittle stems. They are the easiest to pick badly. The best method is to pick them in the same fashion as packhams but with far more emphasis on keeping the stem intact, with larger sized pears it may also be necessary to hold the weight of the pear with you other hand. These pears can be very frustrating to pick because not only do the stems break easily the resulting sharp snapped point can easily pierce the fragile skin of other pears when in the bag or moving to the bin.

Some tips on how to get better at pear’s picking

As with all fruit, get the technique right first and then speed it up. Much about picking pears can be related to other fruits and some of this advice may not become clear until you actually start to pick:

Go up the ladder first with an empty picking bag and top it up with fruit reachable from the ground before going to the bin always with a full bag if you can. Place ladders parallel to branches and pick to your side, the idea is to get the ladder in a position where you can pick as much as possible without having to move it. When you need to move the ladder it should be an easy continuation around the tree in one direction; after a while a pattern should develop and ladder placement should become second nature. Sometimes, a useful trick is to forget the pole and lean the ladder directly against the trunk of the tree. Another trick is to turn yourself around so you face away from the ladder and pick backwards. Pick as much as you can from the ground; when faced with a limb full of fruit reachable from the ground pick the highest and closest to the trunk first because pears are so heavy as you pick them off the limb will rise. Be aware pear tree branches can break.

A day’s pear picking as mentioned is hard work, when the season is in full swing you will surely get tired. I strongly believe having a daily routine helps you through the season, from the breakfast to that all important cold beer at the end of the day. Isotonic drinks are good for replacing minerals lost in sweat and whey protein for muscle repair. Wear a hat, a long sleeve shirt and drink plenty of water, a cool box for your water is a good idea. Get yourself some tough long socks and cut finger holes at the ends; wearing these as fingerless gloves protect your hands and wrists from scratches that the abrasive bark of the pear trees are sure to give you.

Now for the most important bit, how much can you expect to earn? One advantage with the industry being so localized is that the price per bin as far as I am aware is fairly consistent from farm to farm: expect $36 or more per bin. As a first time pear picker, if you can get up to 6 bins a day that’s good going. More experienced pickers would aim for 8 and upwards. What I feel is important is to find the number of bins you are capable of picking a day and sticking to it. Keeping a check on the amount of bins you have done at certain times in the day will keep you at the pace needed to fill your personal quota. 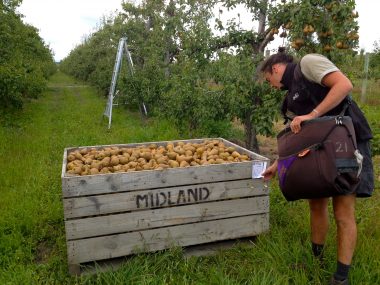 Most farms will give you a tractor and modified trailers for your bins. It will be your responsibility to take your bins in and out of your rows. Assuming you can drive, the classic grey fergi tractors that are normally used are simple things to learn. 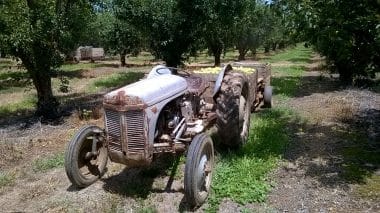 A brand new tractor to carry your bins 🙂

You may come across pickers using hydraulic machines called cherry pickers to aid them; here are just a few things to consider: firstly the hire of the machine is around $25 a day, and the fuel about $10. So straight away you have to sacrifice a bin to use one. Second they do take a while, probably a full season to be fluent in their use, and even when you are they don’t make you any quicker than the manual method with ladder. That said, you will be nowhere near as tired at the end of the day and they can work well with two pickers i.e. one on the machine and one on the ground, while splitting the cost of the machine. 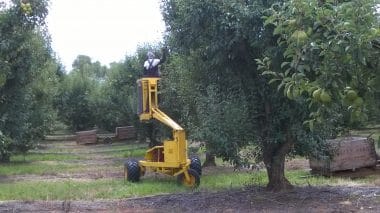 Finally, most pear farms also grow apples; predominantly Granny Smith apples. Although you may find better apple picking elsewhere in Australia they often pick them directly after the pears and this can be a very useful extension to the season. Particularly as the day time temperatures will be more comfortable and the weight difference between pear and apple very noticeable.